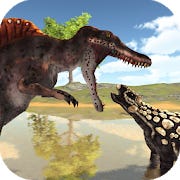 The Spinosaurus, the largest predator dinosaur that ever existed. This majestic creature live in watery world and hunt watery dinosaurs.

In this tropical islands around the south east world, the Spinosaurus need to hunt in order to survive the jurassic era. There are many options of prey available in this coastal islands, such as Parasaurolophus, Stegosaurus, Ankylosaurus and the mighty Triceratops.

Aside from preys, the islands also provides challenge for the hungry Spinosaurus, the predators! Running and hunting in the prehistoric wild, the coastal islands are home to some island predators such as green T-Rex, Carnotaurus and Velociraptor. The time is nigh, the Spinosaurus is growing hungry. Help Spinosaurus to hunt dinosaurs and fill his ever-hungry giant belly.

- Use joystick to move around as the Spinosaurus

- Up to 3 coastal islands to hunt on